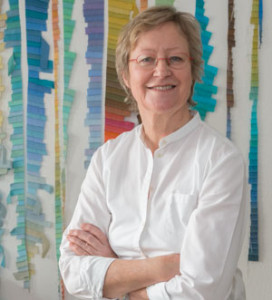 Inge Hueber is a self-taught quiltmaker living in Cologne, Germany – a country without a tradition in this field. She recognized her chance in this outsider’s role, in a new freedom.

Born 1943 in East Germany, she moved to the West in her childhood and taught in Cologne until 1980, when she finally decided to become a full-time quiltmaker.

She established firm links to England, being a founder member of the international group QuiltArt  (1985) and living part of the year in Broadstairs, Kent.

In 2015 her quilt “In Full Swing” got included in the permanent collection of the International Quilt Study Center (IQSC) in Lincoln, Nebraska/USA. Since 2002 her quilt “Rainbow” is part of the collection in a prominent museum in New York City, the Museum of Arts and Design.

She is a keen traveler interested to meet persons around the world and to lecture about “Making Quilts and Journeys”, her personal survey of over 30 years, always updated.

So far she has been lecturing and exhibiting in Australia, Japan, New Zealand, Canada, the United States and Europe. In 2015 she got invited to sit on the panel of the SAQA-Symposium, and to talk about her work (Selected artist: “Inge Hueber, Cologne, Germany. Inge´s work is about beauty and harmony, discipline and precision. This combination is exciting and stimulating, only using colored strips she dyes herself“) The Symposium was held in conjunction with the opening of Quilt National with her quilt „Colourscape I“.